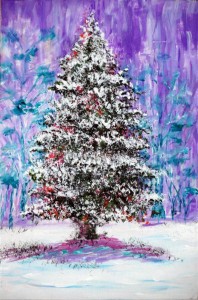 Last weekend we went to Patara wıth some frıends to see the results of the latest  work and the restored Lycian Assembly building alone is worth the visit.  Afterwards we popped into Kalkan for lunch and found it mostly closed up for the winter apart from some very expensive restaurants down on the quayside.  Then, further up, we found Hünkar Ocakbaşı and can recommend it for it’s hearty, delicious and inexpensive regional specialities.  Ocakbaşı means fireside or chimney corner and that’s basically where you sit in this cozy little place.  Anyway, the ambiance got me thinking of Christmas so I’ve started a series of Xmas tree pictures with the vague idea of using one or two as artwork for xmas cards.  I’m finding them perfect subjects to continue exploring this style. 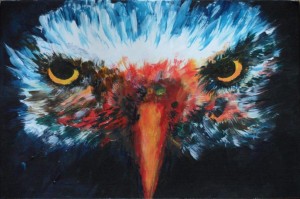 I am a member of an art class who meet on Thursday mornings at the Nayla restaurant  on the beautiful Fethiye kordon or promenade, you would call it.  Our teacher, Leslie is quite ill and receiving treatment back in the UK.   While we wait and look forward to her recovery we continue to meet as a group and I really enjoy our get togethers.   The members are nearly all women and as a side benefit I now know quite a lot about gynaecology and diets.  Unfortunately, in my opinion, the creative side  has become a bit cute and fluffy without Leslie’s direction.  For example, last week the subject matter included kittens, puppies, donkeys, babies and fairies.  When the lovely Linda asked me if I thought her painting of an eagle looked more like a dove I sat down and did this in response.

If you can make it, it would be great to see you! 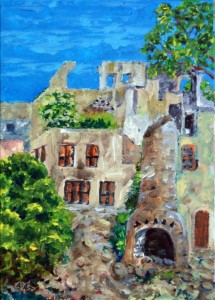 There is a water fountain on the main road through Kayaköy and a dusty alley at the side leads to Sarniç, our favourite restaurant. Just before the entrance you can see, on the left hand sıde, some occupied cottages among the ruins. 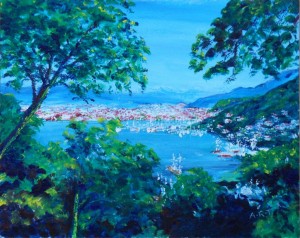 This is my favourite view of Fethiye and my original photo, taken from the hillside above the Marina Vista Hotel and the boatyards, has a picture postcard quality that I rarely capture. The plan is to create a large landscape and this is my first studio sketch using that photo which I intend to follow up with some plein air work.  I limited my pallette to just the three primaries and white and worked with a large brush to try and keep the detail minimised.  I’m really looking forward to the challenge of developing this as it’s a more picturesque subject than most of my work on Kayakoy.

We were on our way to the Yoruk Museum and Restaurant, near Ciftlik run by the always hospitable Enver and Aysun Yalcin and their family.  The museum is off the beaten track and I took the wrong turning. We found ourselves on a narrow lane that soon dwindled into a track running beside a small stream completely overgrown with bamboo. We pressed on, eagerly anticipating our “eat and drink as much as you like” breakfast, the tabletop overflowing with a huge selection of locally grown and home made dishes. But as we motored on, like the Africa Queen on wheels, the lane became narrower, the bamboo denser and our guests increasingly nervous.  I kept thinking it would clear eventually but finally we were forced to a halt, surrounded on three sides by an inpenetrable wall of the stuff, and I had to reverse two or three kilometers back to the turn-off.  Perhaps I could add a machete to the car emergency kit for next time and send Gina out in front to hack a path.  Mmmm….