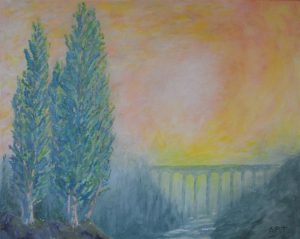 Poplars in a Landscape
60x45cms Acrylic on canvas

There has been momentous changes in the political landscape and the eyes of the world are focused on Turkey, Syria and the Kurdish issue.  But apart from the rarely seen refugees and the drop in tourist numbers, life here in Fethiye remains much the same.  Building development proceeds at breakneck speed, the traffic is more insane and cars ever more luxurious, businesses open and close with bewildering speed and prices are rising exponentially. 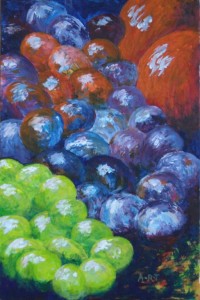 Still life from memory
9″ x 6″ Acrylic on mount board

The sun was shining as I took a walk from here to Calis along the promenade today and things are moving.  The new marina already has 50 or so, small motor boats sparkling as they bobbed about in the breeze.  Workmen were laying more roads and pavements and you can now walk or cycle for an uninterupted 3.7 Kilometres from Fethiye ferry pier. The intrepid can, with suitable footwear, continue along to the newly created Duck Islands. There’s a lot more development to come, including a vast area of former marshland, opposite the Devlet Hospital that was drained and is being raised and levelled.  A few of the new restaurants have already closed for lack of trade, others are expanding and it’s fascinating to watch how much changes on a daily basis. 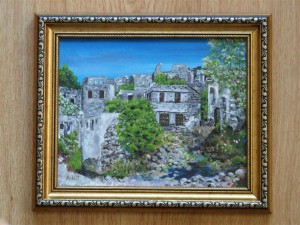 It seems that Turkey has become a MINT!  Like the more familiar acronym BRIC, Turkey has joined with Mexico, Indonesia and Nigeria to become one of the future powerhouses of the world economy.  A strange selection of bedfellows, methinks, but read more here or you can listen to the programme on the BBC Radio iPlayer. 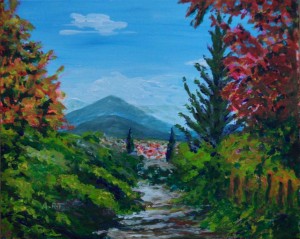 This is a reworking of an earlier painting that I’ve done to remind me of the atmosphere of Calis cemetary.  We walk our dogs on the hills above  and were sad to see that the reckless concrete development of Fethiye continues without respite.  The canals in this area, once the home of egrets and kingfishers, are starting to resemble a scene from a L.A. car chase and the the gravel paths and overgrown verges that crossed Calis cemetary are gone, cut back, levelled and smoothed over with grey concrete.  I love progress but a bit of forethought is desperately needed at the moment. 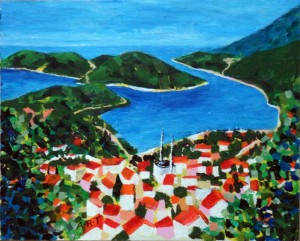 Kaş is a small fishing, diving, yachting and tourist town, with its narrow streets scented with jasmine flowers, and a district of Antalya Province of Turkey.  As a tourist town it is still relatively unspoilt. There are plenty of little guest houses, quiet cafes serving home cooking, or small bars to relax in.  It has an annual arts festival, jazz concerts in the Hellenistic theatre and occasional underwater ceramics exhibitions.  In the early 1990s tourism started booming in Kaş, with visitors mainly from the UK and Germany. This growth of tourism brought an explosion in apartment building and often unlicenced development, which is seriously threatening the landscape and the environment. Particularly affected is the beautiful Çukurbağ Peninsula, west of the town, where many luxury hotels have been built. 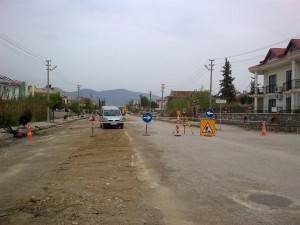 OK! That only leaves straight up!

Today I just want to post a couple of funny things I’ve seen this week. 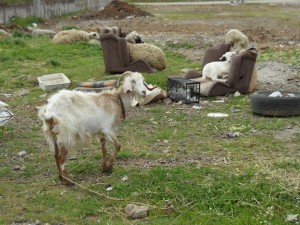 There’s a nip in that wind today!

We are used to living on a building site such is the rate of development round here but we have been suffering for months while the Belediye install a huge system of rainwater drains across half of the town. We’ve been living in a mud bath now being baked into a dust bowl.  It will be nice when it’s finished, as they say!  Of more concern to me is what happened at the weekend. 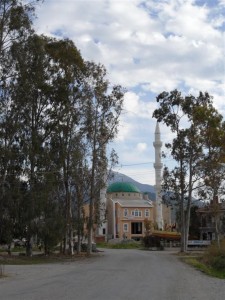 The new mosque then

I went out to paint this scene, one that I photographed late last year as I roamed on my bike. A new cami framed by some splendid eucalyptus trees. Had potential, I thought…… 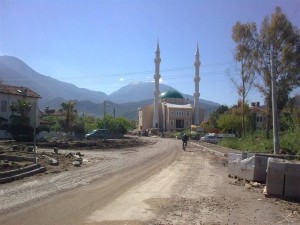 …..but the scene when I arrived had been improved to this! 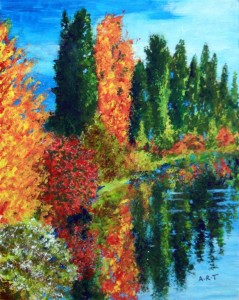 So I came home and painted this small lakeside view instead.