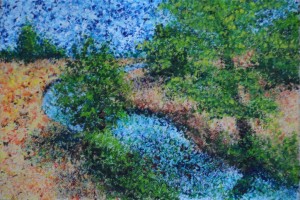 Local boat owners agree that the mass of underwater growth fouling their hulls in Fethiye Bay is among the worst in the world,  I have always blamed the water conditions  on the chemical run-off from the  intensive farming in the vicinity and sewage influx.  Then I was very surprised to learn that Turkey is the largest producer of farmed Rainbow trout in Europe.  An aquaculture survey of 3 trout farms in the Xanthos valley provides some interesting reading including the fact that there are more than 50 trout farms in our catchment and a significant ammount of water is fed, via a canal and hydro electric power station, directly into the sea at Fethiye.  The main purpose of the survey is “to predict the existing and future discharge of suspended solids, organic compounds, and nutrients, thereby allowing authorities to quantify the environmental impacts of activities with the greatest accuracy (Frier et al. 1995)”.   I have estimated from this report  that this means over 2000 tons of Nitrogen and 400 tons of Phosphorous are discharged every year.  When you factor in the sunshine and shallow water it’s no wonder we have a problem with algae!