Not much sleep last night after a chorus of all the dogs in the area woke us at 2.30.  Unfortunately it was  started by our pair, Ziggy and Zara doing their best to make us believe they were being tortured with hot needles.  As it turned out that was a fair description.

Opening the door revealed a pattern of bloody spots and paw prints and we thought, oh no, here we go again!  Luckily, all became clear when Gina discovered nothing more sinister than a very large hedgehog. This was deposited in the field opposite and serenity reigned again, well as near as we ever get to it! 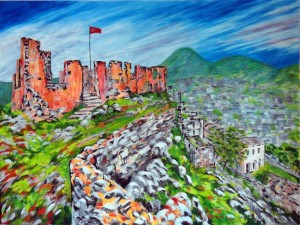 At least the horrible wet weather today enabled me to finish this landscape.  Here, I’m trying to capture some of the spirit of Kayakoy as the changes in the wind move it into another phase.  It’s been out of sight  for a long time, hidden away and quietly corroding, but the future is rushing in as politicians, developers and all the other interested parties begin to unfold their plans and read us their agendas. Plus ca change, plus c’est la meme chose. 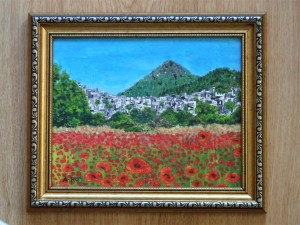 Millions of poppies bloom here in Turkey every spring but I think they look their best against the greys and greens of antiquity and nature dancing to the waltz of time.  I was up at Kayakoy yesterday and was stunned as usual by the profusion of colours.  Despite the many roadside verges that have been bulldozed away, it makes me so happy that wild flower meadows are still a normal part of the scenery around here.  Let us hope that it lasts!

I was given a telling off yesterday by my neighbour, the farmer’s wife.  We have a beautiful Mimosa tree http://spiritrisingherbs.com/?p=33 which blooms throughout the summer but it was planted against the garden wall and, willow like, it’s branches hang down and block the road.  I can live with that but, annoyingly, they also grow through the electricity cables. 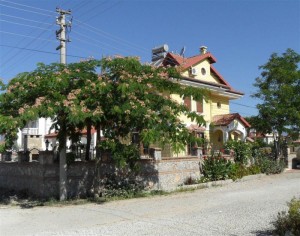 So every few years I have to give it a severe haircut. I had just climbed down after the latest operation when I was sharply interrogated about my intentions regarding the 50 or so branches strewn across the road. Up ’til then I’d been using a hand saw as chainsaws, me and ladders don’t mix but I explained that I would be using my chainsaw to lop the branches into firewood.  Makina yok! she said, zooming off and after a couple of minutes returned with a wicked looking and razor sharp machete and a chopping block.  I was then given a lesson in the art of stripping off the twigs and lopping the 10 ft. branches into one foot lengths with the same apparent effort as it takes to scramble an egg.  Suitably impressed, I was handed the heavier than it looked billhook and told to start.  Well, after two minutes I discovered, unsurprisingly, it wasn’t anywhere near as easy as it looked!

However, I persevered and managed to complete the job in record time with no damage to the enviroment apart from a couple of blisters.  I sure my neighbours enjoyed a good laugh….”Guess what! He was going to use a machine to make a bit of firewod!” And Gina has promised to buy me a machete for Xmas….mmmm 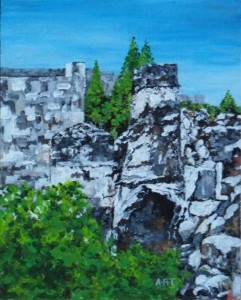 Anyway this has nothing whatsoever to do with my painting today which is of a lonely chimney stack back in Kayakoy. 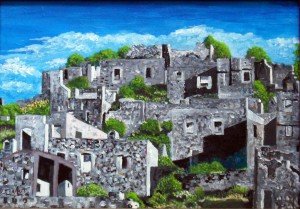 This five-day event, Kayaköy Connections 2013 will celebrate the Kaya valley in southwest Turkey, its long history, rich culture and links with Greece. Acclaimed authors Louis de Bernières, Victoria Hislop, Jeremy Seal will be travelling from the UK and Sofka Zinovieff will be joining them from Athens. Others, from Turkey, Greece, yet to be decided, will join them to take part in a range of thought provoking, fun and entertaining events and gatherings. 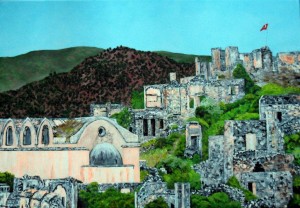 Mostly the light is harsh and unforgiving, it comes from directly above so doorways and windows become black holes. Then again, the sun shines on the white plaster of an internal wall and the window opposite beams like a searchlight. Other days the light is hazy and diffuse, and there isn’t much contrast, shadows get bleached out, then there are no really dark areas and the light bounces off the stone into the shadows.  The walls have eroded into dark and light areas that are independant of the light. So a vertical dark band on a facing wall gives the impression of a shadowed side wall which would naturally be light (if it was there!).  And all the walls are like that.  Its very confusing to the eye and I struggle to resolve it without losing realism.  For example, the apse(in shadow) is lighter than the side wall of the church (in the light) and the pink plastered walls actually seem to glow  It’s very tricky.  On the other hand it’s one of the things that make Kayakoy so visually fascinating to me.